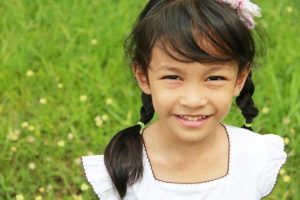 Parents are always looking for ways to keep their kid’s teeth as healthy as possible. One question that comes up frequently is whether a child should use mouthwash and if so, at what age?  Below are some basic guidelines that help answer the question of should your child use mouthwash.

Guidelines for when a child can use mouthwash

For younger children, the idea behind using mouthwash is that it will help rinse away debris in the teeth, if they’re unable to brush or floss right after a meal or snack. While rinsing is a good idea, using mouthwash as a rinse should be done with caution. Children need to be old enough to understand how to use mouthwash correctly. The American Dental Association recommends waiting until they are 6 years or older. Children 6 to 12 years of age should only use a mouthwash when there is a parent or other adult present to make sure the mouthwash is being used correctly, according to the product’s directions. Ideally, children under the age of six should use oral rinses or mouthwashes only when recommended by a pediatric dentist.  Mouthwash should be spit out, not swallowed, just like toothpaste, but it can be tricky for young kids to get use to swishing the mouthwash rather than swallowing it like any other beverage. Want to test to see if your child is ready for mouthwash? Have them take a sip of water, swish it around their mouth and then spit it out. If kids can handle rinsing with water, they can most likely handle mouthwash.

Should all kids use mouthwash when they’re old enough?

One reason older kids want to use mouthwash is when they get braces, which can make brushing and flossing more difficult to do conveniently after every meal. Braces do tend to trap food particles, so it’s a good idea to somehow rinse the mouth to get as many of those particles dislodged as possible. For older kids, there’s the added benefit of freshening their breath, and since (with braces) they likely won’t be chewing gum, mouthwash seems like the logical choice for cleaner teeth and fresh breath. For kids with braces, taking a three-pronged attack against plaque, kids who brush, floss and using mouthwash should adequately protect themselves from the effects of decay while wearing braces.

All rinses are not the same:  how to choose

Once your child is old enough to use mouthwash, find one that is alcohol-free and sugar-free, and contains an anti-cavity substance like sodium fluoride. Basic ingredients include water, alcohol, cleansing agents, flavoring ingredients and coloring agents. Active ingredients vary depending on the type of mouthwash. When possible, avoid mouthwashes with excessive coloring agents.

Final tips on kids and mouthwash

Mouthwash can be a great addition to a child’s oral hygiene routine if used correctly. Here are a few final tips regarding kids and mouthwash. Despite what you might think, there is no real order that kids should follow when brushing, flossing and using mouthwash; all are equally effective if used together, regardless of the order used. Not sure if your child will even like mouthwash?  Let them choose the flavor, as there are several mouthwashes especially made for children whose flavors aren’t as harshly minty as what adults might prefer. And of course, mouthwash is not a replacement for brushing and flossing every day. While children may feel their mouth is nice and clean after using mouthwash, brushing and flossing will insure that plaque is removed and debris is cleared from between teeth.